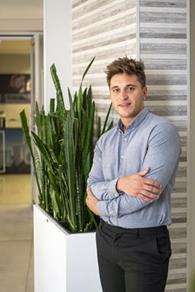 Carl was raised in Cape Town’s City Bowl and attended boarding school in the Southern Suburbs. After school, he moved to Central London in the United Kingdom, where he spent his time working as a barman and travelling throughout Europe. Thereafter, he returned to Cape Town and commenced his tertiary studies at the University of Cape Town, where he completed his Bachelor of Commerce Degree specialising in Economics with Law in 2016 and his postgraduate LLB Degree in 2018.

In 2019, Carl commenced his Articles of Clerkship at a well-known litigation firm in Cape Town. Following a strong desire to work exclusively in the Property Law arena, he joined SSLR in January 2021, as a second-year Candidate Attorney. Carl was admitted as an Attorney of the High Court in March 2022.

During his time at SSLR, he has attended to various opposed and unopposed evictions in both the Residential and Commercial sectors. He has further attended to various rental collections in both the Residential and Commercial Sector. Carl has additional experience in Sectional Titles, Trusts, Insolvency, Divorce and Bail. He attends to regular appearances in the Magistrate’s Courts.

Carl believes in reaching an amicable settlement whenever possible, but he does not shy away from litigation when it is necessary. He furthermore believes in a frank and honest relationship with his clients. In his free time, Carl enjoys the outdoors, music, travelling, long distance running, analog photography and wine.