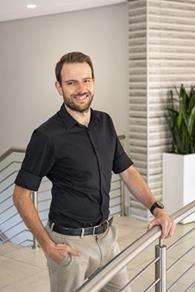 Nicholas was born and raised within Johannesburg, and during his formative years attended St Stithians Boys School, matriculating during 2008. Upon completion of this schooling years he attended the University of the Witwatersrand, first completing his Bachelor of Commerce Degree in 2011, with specialization in risk management and law. Nicholas thereafter went on to complete his postgraduate LLB Degree in 2013.

During his time at the University of the Witwatersrand Nicholas found that he had a passion for sports, and most curiously snow sports in particular. Nicholas is to this day an avid snowboarder/skier who would rather be on the mountain than in the office.

Nicholas joined the SSLR Inc team as a candidate attorney in 2014, and was later admitted as attorney after completing his articles during 2016. Nicholas thereafter elected to continue working with SSLR Inc and during 2017 accepted a position as Financial Director of SSLR Inc, which position he holds to this day. Nicholas has also completed his notary public examinations and has been admitted as a notary.